Predict the next economic crisis

Unfortunately, it is not possible to predict precise data of next economic recession. This is an extremely difficult task, because the phenomenons occurring in the economy depend on many factors. On financial news, we often hear statements from people related to financial markets, which are presented as those, that predicted recessions. However, these people have not reported precise data of the year, month, or day, when the financial market will break down. Based on observations of past events and certain economic indicators, we are able to estimate the risk of the upcoming financial crisis.

When you invest your money in financial markets, it is important to know the operation of elements and participants in the whole economy. A film that will bring you closer the operation of economic machine, you can find here. It is necessary to know the tools that one of the most important institution in the market can use to stimulate or inhibit the economy and the consequences of these activities.

By one of the most important institution i mean, the Central Bank of the United States. Due to the fact that the United States is the largest economy in the world, the US dollar is the world’s reserve currency, investors all over the world listen the words of the Chair of the Board of Governors of the Federal Reserve System, who can outline future decisions regarding monetary policy. Decisions on lowering interest rates or increasing them are very important for the economy as well as for financial markets. The Central Bank may also intervene in the market by selling or buying assets (treasury bonds). All these activities lead to the cyclical nature of credit in the economy, and thus the expansion and recession on the financial markets. The correct determination of the phase in which we are in the cycle, will allow us to minimize the risk of exposure to our investments on the financial crisis in the short term.

If the Central Bank lowers interest rates, the loan becomes more easily available. The companies, thanks to cheap crediting, invest in new ventures to gain a competitive advantage. They employ more people, employee salaries increase, people are willing to spend more and we have a boom in the economy. Investors are willing to raise risk and transfer capital from the treasury bonds to stock markets, which also booms. However, if the Central Bank starts raising interest rates, the situation is reversed. The loan becomes more expensive, the credit costs go up, the companies are no longer willing to finance new risky projects. The costs of financing are increasing, corporate profits are falling, share prices are falling as well.

Where are we now and where are we headed? The current financial landscape will be presented on a graph showing developments of interest rate in the United States of America.

Since the previous financial crisis of 2007-2008, US interest rates had fallen from the rate of 5.25% practically to 0% rate. In order to save financial markets from the economic crisis, FED had cut interest rates to levels unseen from over 65 years. In addition, the FED began to print US dollar for further stimulation of the economy. These activities has blown the record-breaking S&P500 index. Whenever a crisis comes, the Central Bank is easing monetary policy to stimulate the economy. When the economy comes out of the crisis, companies start to hire new people to work, employees salaries rise, companies increase profits, then the Central Bank gradually increases interest rates. However,only to a certain level, when the crisis comes again, because of sensitive credit leverage economy and you need another stimulation from FED. Thanks to low interest rates and cheap credit, equity markets are currently booming, as illustrated in the chart below. 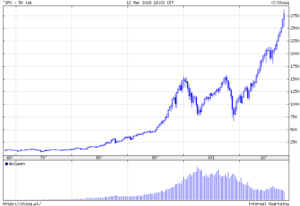 The S&P500 index quotations, from the end of the crisis have risen from around 700 to the current level of 2,750. This is a huge increase. Over the last few decades, we could observe a certain constant cyclicality, the stock market booms for 7-8 years, then the recesion comes that lasts 1.5-2 years. Currently, there is one of the longest boom in the financial markets. Almost 10 years have passed since the last ecoomic crisis. The US economy does not develop at the same pace as it was a few years ago and it is reaching a point, where further development is limited. The economy is “inflated” with cheap credit. The graph below shows that the unemployment rate in the United States has dropped from around 10% to 4%, and it is below pre-crisis levels of 2007-2008, and around the level of 2001 crisis. When the unemployment rate in the United States had approached to 3-4%, we had a recession. One of the reason is US economy reaches its full capacity.

The fact that the stock market in the United States is currently valued very high, you can read from the CAPE indicator for the S & P500 index, which takes the price to average net income of companies for the last ten years, adjusted for inflation. Companies shares are defined as cheap, when the CAPE ratio is below 10, the neutral valued shares are between 10 and 15, the expensive shares are CAPE at 20-25, while the speculative bubble is CAPE above 25. At the time of writing this post, the level of CAPE ratio for S&P500 is 33.71, which proves the speculative bubble. The current level of CAPE is above the level, when the Great Depression of 1929 occurred, then quotations fell by around 90%. The higher CAPE from the current level was only during the boom of technology companies, which end with the bursting of the bubble.

At the beginning of this post, i paid attention to the aspect of credit cycles. From the recent ecoomic crisis, we have experienced the longest perio, when short-term interest rates in the United States remained around 0%, which led to situation that Americans fall in love with life on credit.

At the end of 2017, Americans debt exceeded the level of debt from the third quarter of 2008 and amounted to USD 13.15 trillion (USD 13,150 billion). Home loans represent the largest percentage of total indebtedness, followed by student loans. At the moment, there are no major problems with the repayment of loans, but the situation in the next 1-2 years may significantly change. On March 20-21, the Federal Committee for Open Market Operations (FOMC) is meeting, it will be decided whether there will be a rise in interest rates in the United States. Year of 2016 started the interest rate hike, when there was only one rate hike, while last year the Committee decided on three rate hikes and now stands at 1.5%. For 2018, FOMC predicts that there will be another three interest rate hikes. 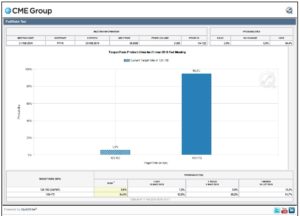 The chance of rate hike on the coming FOMC meeting are currently at 94,4%, so the probability of a March rate hike  is almost certain.

In summary, the US economy has limited opportunities for further development, which means that the possibility of employee salaries increase is also limited, the US unemployment rate is at levels where there is full capacity of economy. In such environment, additional interest rate hike may cause a domino effect. Higher interest rates mean higher credit installment on American loans. Higher fees mean lower levels of further people consumption. Lower Americans expenses mean lower profits for domestic companies. Lower profits of companies mean declines in the stock market. More interest rate hikes may cause also difficulties for people with repayment of loans and the specter of the economic recession becoming more real. The crash on stock markets may be huge, bacause of created bubble.

Presented evidences suggest that the next economic recession is just around the corner. There will be a lot of blood on market, when next rate hikes come to reality.

Recently, the CEO of the largest hedge fund in the world, Ray Dalio, stated that the risk of US economic crisis within 2 years is 70%.

This site uses cookies and other tracking technologies to assist with navigation and your ability to provide feedback, analyse your use.Accept CookiesDisagree For Cookies